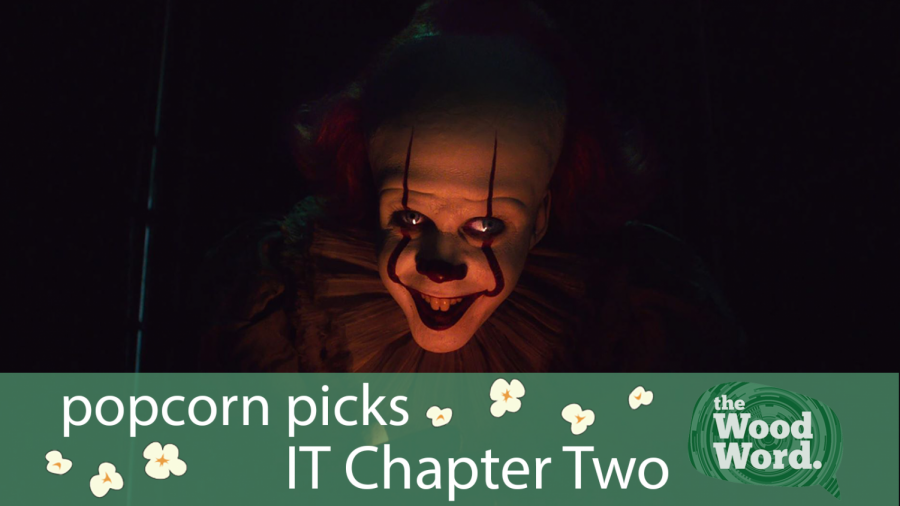 When Wood Word Editor Bethany Wade reviewed “It” in 2017, she said “it will go down as one of the greatest horror films of all time.” After two years of anticipation, the concluding chapter to the modern horror classic has finally arrived with high expectations, but doesn’t quite live up to the hype.

“It Chapter Two” continues the story of the Losers Club 27 years after we left them, with most members having left their hometown of Derry, Maine. Many have gone on to become successful in their respective careers and have forgotten about their childhood in Derry and their encounter with the evil entity Pennywise. However, Mike Hanlon, portrayed by Isiah Mustafa, never left and has not forgotten the blood oath the Losers Club made to come back home and finish off Pennywise if he were to ever return.

As Pennywise does every 27 years, the clown is back and begins to ensue chaos on the residents of Derry. After a few phone calls, the Losers Club is reunited in their hometown, although it becomes quickly apparent that they want nothing to do with Pennywise. However, after some chilling realizations, the club is convinced to stay and to finish what they set out to do 27 years prior.

“It Chapter Two” has to be commended for its well-executed casting. Each member of the Losers Club looks and acts like their younger counterpart from the previous film, so much so that this can easily be their parents playing in these roles. Bill Hader shines as Richie Tozier, delivering a performance that can make audiences both laugh and cry. Hader, along with James McAvoy as Bill Denbrough, Jessica Chastain as Beverly Marsh, James Ransone as Eddie Kaspbrak, Jay Ryan as Ben Hanscom and the aforementioned Mustafa as Mike Hanlon make up for a cast that feels just as special as the one featured in the first chapter.

The younger version of the Losers Club does return for chapter two by way of flashbacks and accounts for for some of the most memorable moments of the film. The pace of the movie slows down considerably when the kids are on screen and Director Andy Muschietti takes his time delving into each of their backstories and encounters with Pennywise. Speaking of time, be prepared to spend a lot of it in your theater because “It Chapter Two” clocks in at a whopping 2 hours and 50 minutes so grab your soda and popcorn and get ready.

It is important to know that “It Chapter Two” isn’t quite what it is made out to be in the advertisements. Unlike its predecessor, you can’t just pop this movie in and casually watch it. This is very much a character driven film with many of the horror elements seeming to be secondary to the story. There are tense moments throughout, but calling this movie “scary” is a stretch. You need to know and care about these characters to get the most out of this film, so watching the 2017 original is a must. This isn’t necessarily a bad thing considering the story and characters are interesting and likable, but if you’re just going to watch “It Chapter Two” because its a scary movie to go see on date night, you’re going to walk out disappointed.

That’s not to say Bill Skarsgård shouldn’t be commended for his performance as Pennywise. Skarsgård does a great job reprising his role as the shape-shifting entity; however, his on screen appearance doesn’t feel quite as scary after being given two years to prepare for it.

“It Chapter Two” is quite the different film than the one than came before it for better and for worse. It is not quite the horror classic the first chapter is considered to be, but fans will get to learn more about the characters they fell in love with two years ago and get a satisfying conclusion to their story. While it is a shame the horror doesn’t hit quite as hard as the first go around with Pennywise, there is still plenty to enjoy for fans of the first chapter. For those looking for a scary movie however, you’re better off renting the first chapter elsewhere.