Popcorn Picks Fall 2019 Preview: Keep an eye out for these films this fall 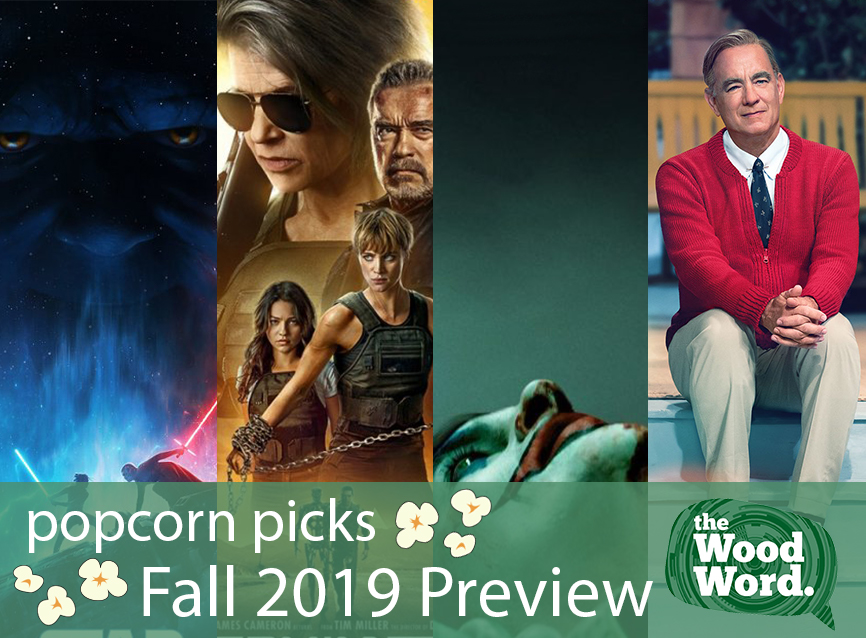 After starting the year off with “Us,” “Avengers: End Game,” “Pokemon Detective Pikachu,” and “Midsommar,” it is easy to see why 2019 has been an amazing year for film. Although, it isn’t about how you start. It’s about how you finish.

Can the rest of the year’s films be as acclaimed as ones in the first nine months? These are the films you should keep an eye out for as 2019 comes to an end.
Drama

“The Lighthouse” stars Willem Dafoe and Robert Pattinson as two lighthouse keepers trying to keep their sanity when left in solitude. The film takes place in 1890 and is shot entirely in black and white. With a 94% score on Rotten Tomatoes, “The Lighthouse” has already impressed audiences and can be seen in theaters beginning on October 18.
“A Beautiful Day in the Neighborhood”

Based on a true story, “A Beautiful Day in the Neighborhood” brings us inside the relationship between journalist Lloyd Vogel, played by Matthew Rhys, and Fred Rogers, played by Tom Hanks. Though the cynical journalist was hesitant at first, his time with Rogers teaches him about friendship and acceptance. Having Hanks bring the story of a beloved person such as Rodgers to life gives this film the potential to be a heartwarming classic. See it in theaters Nov. 22.
“Joker”

In “Joker,” Batman’s archenemy finally gets his own origin film. The movie follows Joaquin Phoenix as Arthur Fleck, a failing comedian on his journey to becoming the killer clown we all know and either love or hate. The film already has rave reviews even taking home the Golden Lion at the Venice Film Festival. “Joker” opened in theaters on Oct. 4.
Action
“Terminator: Dark Fate”

“Terminator: Dark Fate” serves as a sequel to 1991’s “Terminator 2: Judgement Day” and ignores the events of the most recent three films in the franchise. This soft reboot follows Sarah Conner as she attempts to protect a young girl from a terminator that came from the future. Will this film live up to the legacy the franchise has created? “Terminator: Dark Fate” opens in theaters in Nov. 1.
“Star Wars: The Rise of Skywalker”

Based on the best-selling Stephen King novel of the same name, “Doctor Sleep” follows Danny Torrence many decades after the events of its predecessor, “The Shining.” After finding another young girl who shares the mystical power of “shining,” he must protect her from a cult that wants to use her power against her will. “Doctor Sleep” hits theaters Nov. 8.
Comedy
“Jojo Rabbit”

“Jojo Rabbit” brings viewers back to Nazi controlled Germany where Jojo, a ten year old German child, is training to become a Nazi soldier. He discovers that his mother, played by Scarlett Johansson, is hiding a Jewish girl in their home and must must deal with the challenge of his conflicting beliefs. “Jojo Rabbit” hits theaters on Oct. 18.
“Zombieland: Double Tap”

Ten years after the original, “Zombieland: Double Tap” sees Jesse Eisenberg, Emma Stone, Emma Stone and Abagail Breslin return for another journey across the zombie infested wasteland. The new characters, jokes and unconventional situations are helping this sequel to be follow-up fans of the original have been waiting for. “Zombieland: Double Tap” premiers in theaters on Oct. 18.
Animation

Taking place three years after the original, “Frozen 2” sees Anna and Elsa take a trip north of Arendelle to uncover the origin of Elsa’s powers. Despite a more serious tone being shown in the official trailer, this sequel is still set to feature seven new songs for audiences to sing along with. Audiences can find out the truth behind Elsa’s powers on Nov. 22.
Musical
“Cats”

Based on the beloved musical on the same name, “Cats” follows a tribe of felines as they decide which of them will ascend to heaven to be reborn. While the costumes from the musical might be strange to some, the CGI of the upcoming film has undeniably been creeping some audiences out. “Cats” hits theaters on Dec. 20.

Although it may be getting cold outside, there is always a warm seat in your local movie theater.