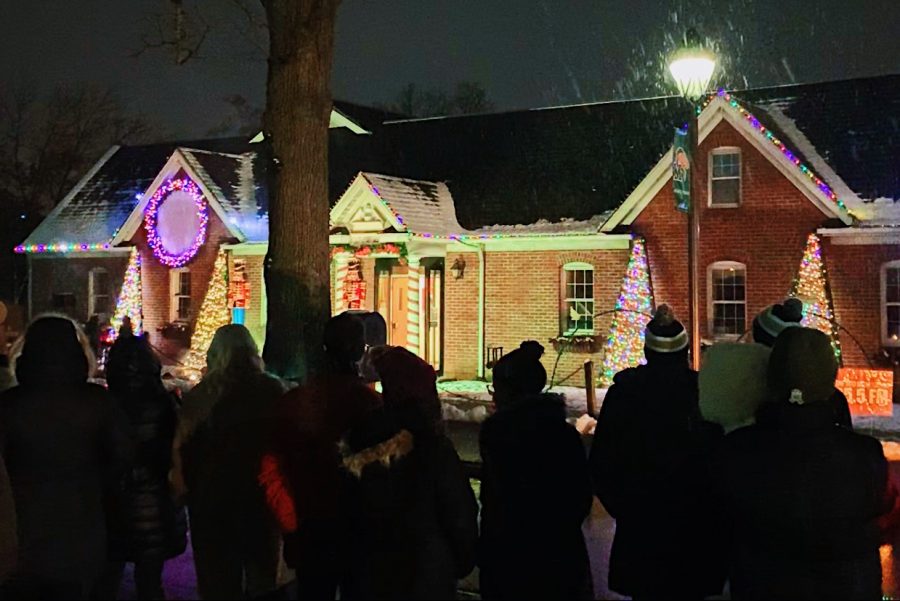 Students gathered outside of the Printing and Mailing Center to watch Marywood's first ever light show on Dec. 4. Photo credit: Katie Warnokowski

In conjunction with students from Marywood’s Interior Architecture program and members of the International Interior Design Association (IIDA), Marywood University held its first ever light show in an effort to help kick off the holiday season.

“They wanted to make more [signs] and spread them throughout campus and I came [to them] with the light show because I have been doing light shows for several years in my community,” said Freely. “So we decided to bring that to Marywood so more people will see it.”

Graduate Interior Architecture Student Natasha Gillott also assisted in the construction of the light show and the shooting stars and candy land light sets that can be seen on campus. Additionally, Gillott created different signs and promotions for the lighting, including a plan that tells visitors how to make it through the light show.

Despite all of the hard work involved, Gillott said she saw the construction as an opportunity rather than an assignment.

“It really was just an assignment for [Masters of Interior Architecture students] but for me it’s a little bit more,” said Gillot. “I love Christmas spirit and I love helping out.”

Both Gillott and Freely anticipate a lot of community engagement between Marywood students and those in the surrounding community.

“I think the community is going to love it,” said Freely.

Gillot said that members of the campus community were already expressing gratitude before the light show occurred.

“A lot of people have been stopping by and saying thank you already because so many people drive through campus and walk their dog and go on jogs and it’s just dark so they’re very thankful that its being lit up and we’re finally joining the Christmas spirit,” said Gillott.

Gillot also said that Campus Safety believes as long as there is a clear path through Marywood’s roads there should be no disruption of traffic patterns due to a possible high influx of visitors.

Freely and Gillott said they hope the light show can become a tradition at Marywood going forward.

“We would love for this to keep growing,” said Freely. “We’ve even talked about next year, getting each department involved so they can all be in charge of decorating their own building and their own area.”

Marywood’s Christmas lights will remain on display until Jan. 1, 2020 and are open to the public.