Pet Spotlight: Wings the service dog acts as his owner’s eyes around campus 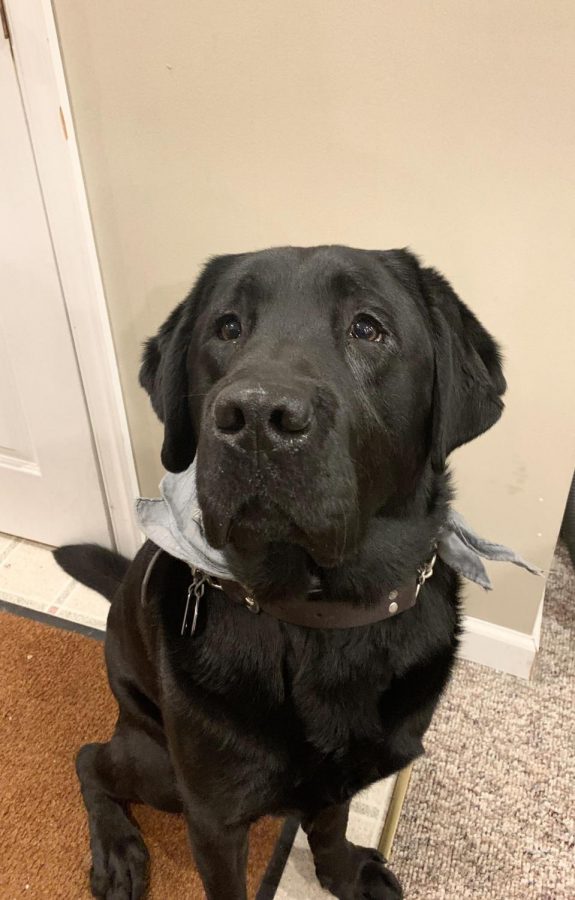 It’s no secret that Marywood has its fair share of pets on campus.

In this new column, The Wood Word aims to give these animals their time in the spotlight for helping students get through their college careers.
Meet Wings
Wings is a two-year-old black Labrador living in Loughran Hall with his owner Junior History/Pre-Law Major Zachary McDonough. McDonough met Wings in November 2018 at Leader Dogs for the Blind in Rochester Hills, Michigan.

Leader Dogs for the Blind is a national non-profit organization that trains canines to act as seeing eye dogs for those who are legally blind to help restore their independence. When McDonough was 16 years old, he was told he had a genetic mutation that caused him to have no peripheral vision or night vision, making him legally blind.

Before he came into McDonough’s care, Wings trained as a service animal in a prison where inmates taught service dogs commands. Once the dogs are ready, they are sent to Leader Dogs to become companions to the people they will help.

McDonough said that a lot of work went into learning what it takes to care for an animal such as Wings. He said he spent 25 days learning about Leader Dogs, going over the commands he can use and training with Wings.

Wings’ biggest task is keeping McDonough clear of any obstacles he doesn’t see right away. Even though Wings must act as McDonough’s “eyes,” the two work as a team.

“I’ll say ‘find the stairs,’ ‘touch,’ ‘left’ and ‘right.’ It’s not like he knows everything, I have to give him the commands to know things,” said McDonough. “Sometimes he’ll pull me though if there’s a wet floor sign I don’t see so I don’t run into it.”

One command that McDonough uses often, describing it as Wings’ “trick,” is “touch.” “Touch” is used when McDonough doesn’t know where Wings is and can’t see him. When McDonough calls for Wings to “touch,” Wings touches his snout to alert McDonough to where he is.

While both Wings and McDonough are friendly and welcome people who may want to meet them, McDonough asks that people not touch Wings while he has his harness on. When Wings has his harness on, it means that he’s working and cannot be distracted by someone petting him and potentially put McDonough in harms way.

“If you ever see me and I’m not doing anything, I would love for you to hang out and play if and we’re somewhere where I can take the harness off, ask and I will,” said McDonough. “If I can’t because I’m in a hurry or I’m in a location where I shouldn’t then I won’t, but it never hurts to ask.”

McDonough said that he enjoys interactions he has with people because it gives him the natural opportunity to talk about being legally blind.

“[Having Wings] made me a lot more comfortable talking with people about who Wings is and my eyes, but it’s also a great opener because people are more willing to talk and listen than if I was walking around with a blind cane. They listen to what you have to say,” said McDonough. “I can educate the community and it makes me more comfortable with who I am.”

Wings accompanies McDonough mostly everywhere including his classes and extracurricular activities such as his involvement in Phi Mu Delta, Marywood’s fraternity.

Brother in the fraternity and friend to McDonough, Senior Pre-PA Major Christopher Cariffe, sees the duo throughout the week, but he spends the most one-on-one time with Wings when accompanying McDonough to his room.

While Cariffe waits for McDonough, Wings will present Cariffe with a rubber ring in hopes of playing tug-of-war with him until McDonough is ready to leave.

“Once I grab it, he pulls, so he loves playing tug-of-war with me, and I usually let him win or he wins on his own,” said Cariffe.

Aside from tug-of-war, some of Wings’ favorite things are the snow and Nazareth Dining Hall where he can be seen stealing food. On the other hand, he dislikes when McDonough isn’t playing with him and cars.

McDonough says Wings gives him the confidence and the independence he needs. He struggles the most while walking at night, but with his canine companion at his side, he knows he is safe and has nothing to be concerned about.

“When Wings isn’t there or somewhere where he can’t be, I worry a lot more at night,” said McDonough. “But when I have him at night, I don’t worry, I just go, and I get to live my life. He is very loyal, and he is the best boy.”