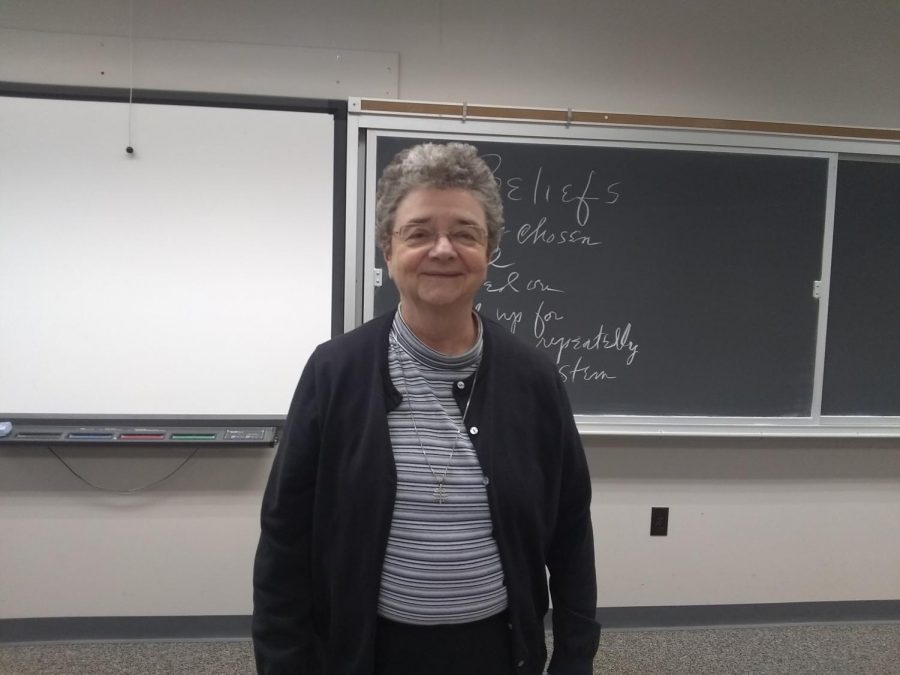 From the parables of Jesus to the power of a positive attitude, students at Marywood have been learning from Sr. Maria Rose Kelly for 31 years.

Sr. Kelly, known to her students as Sr. Rose, has served as a member of the Congregation of the Sisters, Servants of the Immaculate Heart of Mary (IHM) since 1960. She has spent 31 of those years teaching religious studies at Marywood.

Sr. Kelly’s journey as an IHM Sister began in fourth grade when she chose to attend St. Rose High School, a Catholic institution close to her home in Carbondale, Pennsylvania. Kelly said that she didn’t attend the school because of its religious affiliation, but rather because of its proximity to her house.

Kelly attended St. Rose High School from fourth grade through her senior year and grew to love the Sisters that taught there.

“They were kind. They were good to us. They seemed happy with one another,” said Kelly.

As a result, Kelly joined the IHM Sisters at the age of 17, despite her parents’ concern that she should attend college first.

“My parents were not as happy as I was because they thought—and I think they were right about this—that it would have been better if I would have gone to college first because I’d know myself better,” said Kelly. “But I wanted to go, and they didn’t put me out or throw me out.”

Kelly has worked in many different roles within the IHM and Marywood communities since joining the IHM Sisters. These include being a counselor, professor and vocation director as well as working at a retreat center for five years.

In her time as a professor, Kelly has taught several classes including Modern Belief, Christian Marriage, Women and Religion, Sacraments in Practice and the Parables of Jesus.

Kelly said her favorite part of teaching at Marywood is interacting with the students.

Freshman Architecture Major Bianca Bancheri took a class with Kelly during the fall 2019 semester and said she enjoyed interacting with Kelly in class.

“She is probably one of the sweetest human beings I’ve ever met in my whole life. She’s so amazing,” said Bancheri. “She’s always in a good mood, and if she’s not, she still finds the bright side in everything.”

This semester, Kelly is teaching just one section of Modern Belief at 8:00 a.m. on Mondays, Wednesdays and Fridays.

“When everybody else is going to work, I am coming home from work,” Kelly said.

In her free time, Kelly said she enjoys reading and watching mysteries on television.

“I like to watch Law and Order. I shouldn’t confess that, it doesn’t seem so good, but I do. I like the characters, and the stories are very eye-opening,” said Kelly.

After 31 years of teaching at Marywood, Kelly said she has started to think about concluding her teaching career because she is beginning to have trouble remembering students’ names.

Despite her teaching career drawing to a close, students like Bancheri will still look back fondly on what they have learned from Kelly.

“My biggest takeaway from Sister Rose is just to keep your head up all the time because you don’t know how much [you] actually impact someone’s day,” said Bancheri.