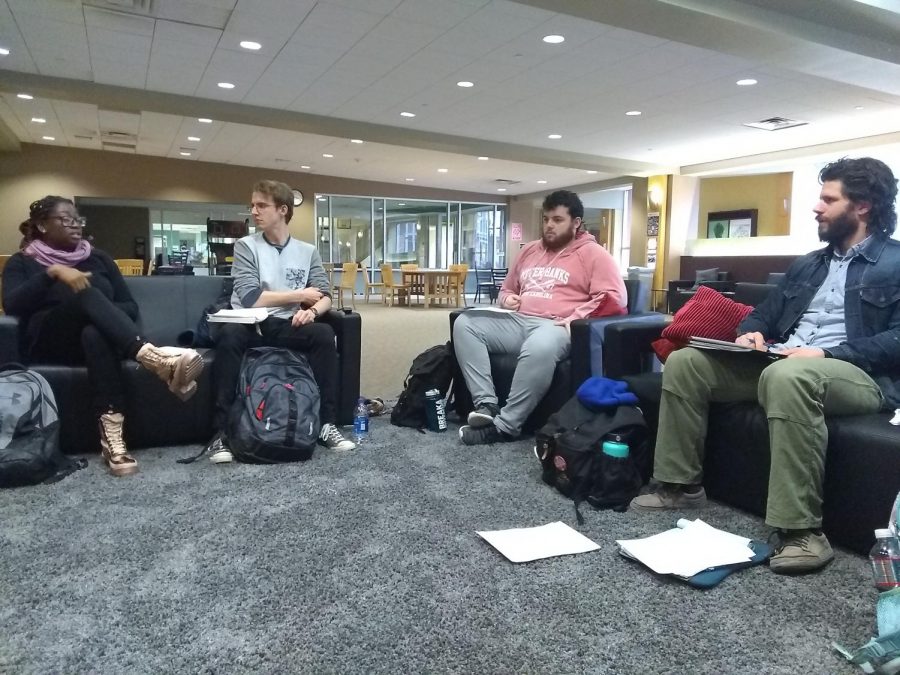 Members of Marywood’s newly formed chapter of YDSA meet to discuss their plans and ideas for the organization this semester. Photo credit: Elizabeth Deroba

After noticing a lack of political organizations on campus, Sophomore Pre-Physician Assistant Major Benjamin Levanduski sought to rectify it.

On Friday, Jan. 31, Levanduski and four other Marywood students met for the first ever gathering of the Marywood chapter of the Young Democratic Socialists of America (YDSA).

According to the their website, YDSA is a branch of the Democratic Socialists of America centered on college campuses across the United States. YDSA is devoted to promoting activism and democratic socialist ideas such as Medicare for All and the Green New Deal among college students.

Levanduski, the current acting president of Marywood’s chapter of YDSA, said he formed the organization in order to help students to further engage in politics.

“It helps people to bridge the transition from talking about issues in a hypothetical way in their classes to engaging in policy making and advocating for those ideas directly,” said Levanduski.

Junior Computer Science Major Patrick Smith also serves as an acting officer of the club and expressed enthusiasm for the opportunity to inform his fellow students.

“I’m excited to educate people on policies,” said Smith. “I feel that especially in our two party system, there’s a lot of political ideas that people haven’t even heard of, especially within the realm of socialism.”

At the meeting, the group discussed several possible initiatives to enact on Marywood’s campus, including collaborating with Pugwash to promote the politics of environmental protection and bringing in speakers to discuss the concept of Medicare for All.

Although YDSA is still in the developmental stages as a club, Levanduski said its existence is important to the democratic process.

“When there aren’t public political organizations or ideas being exchanged in an open way, that kind of democratic-like reflex or decision-making ability starts to atrophy,” Levanduski said. “People start to get nervous or afraid to express their opinions, almost like they’re doing something wrong.”

For more information about Marywood’s chapter of YDSA, Levanduski said to watch out for posters announcing the next meeting.