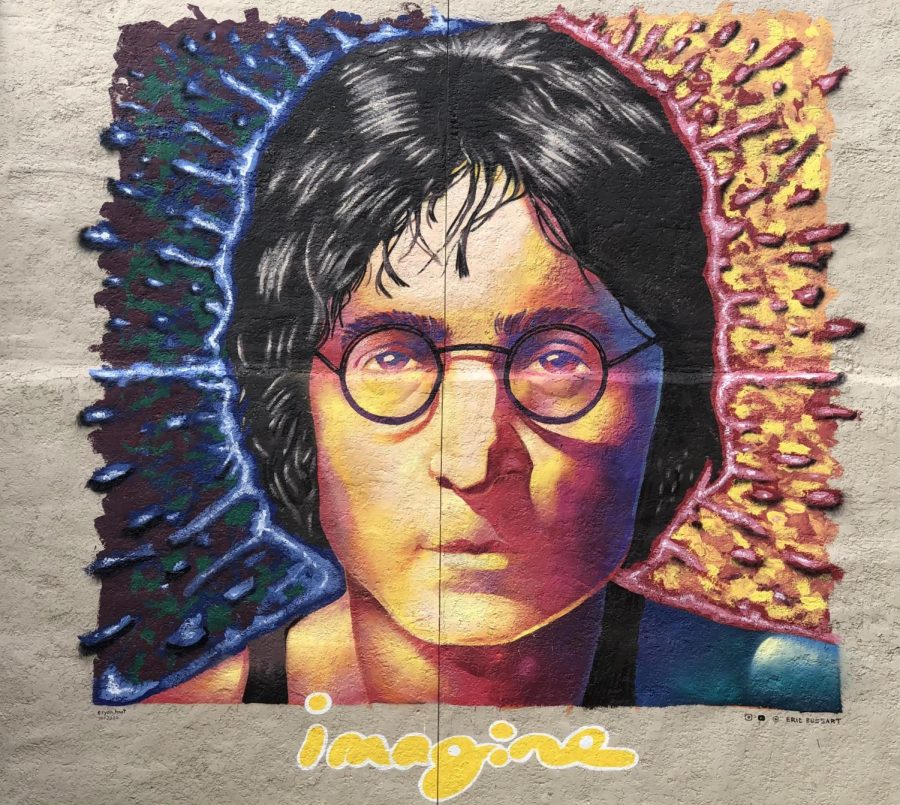 The mural incorporating the artwork of Leagen Wallace and Krista Perdomo at 518 Lackawanna Ave.

Downtown Scranton will be paying tribute to long-term music sensation and peace advocate John Lennon up until the 40th anniversary of his death this December.

Frank Dubas, a Jessup native, has been a fan of The Beatles since his teens. He noted that his first vinyl record was that of the fab four’s eighth studio album, “Sgt. Pepper’s Lonely Hearts Club Band,” which he bought shortly after its release in June 1967.

However, Dubas’ adoration for the album and his self-proclaimed favorite Beatle did not end there, as it was, in fact, just beginning. He recently decided to commemorate the life and death of Lennon with a mural on the side of 518 Lackawanna Ave., which he owns.

To do this, he invited the faculty, students and staff from Marywood University to come together and create submissions featuring Lennon and the term “Imagine.”

The latter of these requirements is not only the title of the influential musician’s second solo release but also correlates with his efforts acting as an activist for peace and anti-warfare throughout the late 1960s and 1970s.

Out of the submitted creations, he chose those from First-Year Arts Administration Major Leagen Wallace and First-Year Art Therapy Major Krista Perdomo to be a part of the installation.

Both Wallace and Perdomo will also receive a $500 scholarship for their involvement.

Perdomo said she entered the contest because she felt it suited her strengths due to her major and her love of making portraits.

“I know John Lennon has a very distinct personality, so I wanted to highlight that by not using so many skin tones and using color for the portrait instead,” said Perdomo.

Wallace said she entered the contest because she thought it would be an enjoyable experience, especially given how her father loves the discography of Lennon and his bandmates.

“After I heard that someone was putting up a mural of Lennon, I started thinking about different designs for my submission,” said Wallace. “I picked a photo and used it as a reference for my idea.”

Perdomo and Wallace said they were both thrilled to receive the news that their artwork had been selected by Dubas for the installation.

“I couldn’t even believe it,” Perdomo said. “I was so excited, it’s just crazy knowing that I won.”

Wallace said she was surprised to have her work selected given the high-quality of work she has seen produced by artists at Marywood.

“I’ve seen people with really high-quality artwork here so when I saw [the email], I was so shocked, I was so happy,” said Wallace.

The mural will be up until at least Dec. 8, the 40th anniversary of Lennon’s death, after which it will be painted over.