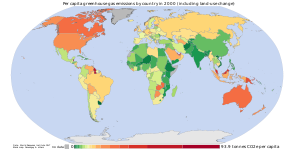 Sorry Mother Nature, but it looks like an innocent round of the blame game has prolonged your stay under the greenhouse. At the Copenhagen Climate Summit, 110 world leaders met to pit a battle against public enemy number 1: global warming. It’s no secret that our choices have influenced the state and well being of the planet. The burning of fossil fuels, deforestation, and the release of greenhouse gases have all lead to changes and sometimes irreversible consequences. Polar ice caps are melting, seas are rising, species are becoming extinct, and the earth itself is warming. If we continue on the same path we are riding, this would result in the eventual onset of dramatic catastrophes that would change life as we know it.

The majority of the world’s governments indeed believe that climate change poses a threat to human society and the natural world. It was their hope at the summit to procure a treaty legally mandating coordinated international action, all before the Kyoto Protocol runs out in 2012. Early outlines were hopeful, asking for an 80% decrease in carbon emissions by 2050 and limiting the temperature rise to 1.5°C (3.47°F). After much debate between the primary drafters (United States, China, India, Brazil, and South Africa), the final product labeled the Copenhagen Accord, leaves much to be desired. In fact, the final decision reflects that many countries only want to be answerable to themselves. A choice that is birthed in the deadly combination of political will, economic directions, and public pressure.

Summarizing the accord, the key points represent a mixed bag of both successes and failures. The summit itself was monumental in that it redefined debate between countries and raised public awareness of climate science. Aside from that the summit can be divided into two ideas. The first is that it vowed to aid lower economic countries in instilling green practices. Developed countries aim to mobilize $100 billion per year by 2020 to address the needs of these developing countries. In addition to this support, developing nations need to report their plans to curb emissions for approval. This will all be run through the Copenhagen Green Climate Fund via the UN. However, the treaty is vague as to how this money will be acquired. Given the current economic state of the world, it is unclear about whether any funding will be supplied. Obama and other western leaders have pledged only $10 billion per year by 2012.

The second idea, and perhaps the most dominant feature, pertains to the actual climate change practices. The accord represents a commitment to reduce emissions so as to hold the increase in global temperatures below 2°C (3.56°F). For this to occur, emissions need to be cut by 25-40% worldwide and the peaking of global emissions and subsequent decline need to occur as soon as possible; within 15-20 years. Most of the countries at Copenhagen were prepared to offer big cuts in emissions if other countries took tough action. However pledges appeared to be sticking to the lower end of the range. For example, even though China had pledged a reduction of 45% by 2020, the United States took the lower route of 17%. Both are some of the heaviest hitters in the releasing of greenhouse gases. Most pledges then were not enough to halt the overall global rise in emissions and keep the increase below 2°C.

Copenhagen’s Achilles heels are that it is only good in theory and it does not go far enough. Even if the 2°C mark was made, this simple increase could spell chaos. If this were to occur it may result in an increase in sea level of 7-9 meters (2.3-3 feet) and massive extinctions of animal species. Also there were no legally binding deals made or any commitments to reach one in the future. No global targets for emissions reductions by 2050 were ever reached. Countries are on their own to hold their promises. But will that be enough? The implementation of the accord will be reviewed in 2015 and an assessment will be made of whether the goal of keeping global temperature rise within 2°C needs to be strengthened to 1.5°C. So from now until then, business as usual still reigns supreme.
Related articles by Zemanta